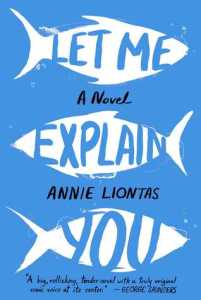 I received an ARC of this book via NetGalley.

You know those books where you read the first few pages and you think, “Ah, I already know where this is going”? But then that’s not where it goes at all? And it’s not even a mystery or thriller and so you’re doubly surprised? Let Me Explain You was like that for me.

The plot centers on a Greek immigrant and restaurateur, Stavros Stavros. He wakes up one morning from a dream which he morbidly believes is a premonition of his death. His very impending death. Estranged from his three daughters, he contacts them in hope that he can tie up some loose ends. Alas, his daughters—three grown women with very different personalities—think he’s just a pathetic old man seeking undeserved attention. The story evolves by transporting the reader to past events that not only explain who the characters are, but also why the relationships between them are the way they are.

I admit I judged this book too quickly. The first few chapters led me to believe that Let Me Explain You was one of those “Chick-Lit”, poolside reads about a dysfunctional American family coming together. “BREAKING NEWS! Three sisters who don’t get along and their father who doesn’t understand them!” And the sky is blue and so on and so forth.

Fortunately, the author proved me wrong (please note I say this rarely and enjoy it while it lasts).

This book is raw. Emotions drive the story, no doubt about it. But not in a mushy, let’s-all-have-a-group-hug kind of way. It’s emotional because it’s realistic and evocative. To better illustrate, think about when you’ve smelled something redolent of a specific childhood memory, and you remember what you were feeling at that moment in your life. That’s what this book was like. It hits a nerve you can’t quite put a finger on.

I could be biased here because my parents are also immigrants. We’re close, but oftentimes I feel like we’re not on the same page. We don’t communicate in a way that allows us to really know who the other person is—the person beyond the Mom/Dad/Daughter role, and it’s more than just a language barrier. It’s as if the cultural difference inhibits us from fully appreciating one another. Does that make sense? Maybe not. I can never adequately explain the disparity between my parents and myself. Liontas comes pretty damn close, though.

1.  The author’s inconsistent writing style detracts from the book’s quality. The prose vacillates from being simple and eloquent in some parts to convoluted and distracting in others. I can’t tell whether this problem derives from the fact that I read an uncorrected proof, or from the possibility that Liontas has yet to establish her own voice. Either way, this inconsistency is the reason why I initially misjudged the book.

2.  The ending felt rushed and anti-climatic. Unless I’m missing some subtle message here, the wrap-up just didn’t seem significant or even relevant to the story. If you choose to carefully develop only a handful of characters, why dedicate one of the most important parts of a book to an underdeveloped character? That said, I could see some readers being satisfied with the conclusion given its surprise element, so maybe it’s just me.

TL;DR: I recommend Let Me Explain You to people whose parents are immigrants, to people curious about immigrant family dynamics, or to people who have no friends and just need something/someone to relate to. (Just kidding about that last bit. I’m sure you all have friends.) I probably wouldn’t recommend it to people who measure a book’s quality solely by its prose or conclusion.